We have been, in all our previous blogs on this topic, recommending a contrarian approach to Long Term Bonds- especially since mid last year when 10 Yr Gsec Bond yields crossed 8.2%. In the last one week, US Bond yields as well as Indian 10 year bonds both touched 20 month lows- the opposite extreme. As a corollary, Long Term bond funds have delivered in excess of 6.5% returns , versus a BSE Sensex return of 10.5%. So what’s been up!

US- The Middle Aged Sag

Global analysts believe the U.S. central bank could cut its interest rate before the year is out with an increasing belief there could be as many as 3 cuts till 2020.  Fed’s Powell has been quoted as saying that the Fed will “act as appropriate to sustain the expansion” in recent times. The subsequent dip in the Dollar on June 4, 2019, suggests that markets perceived the comment to be a hint that a rate cut could be on the way.

An escalation of the U.S.-China trade war, a slowing economy and below-target inflation could mean that an interest rate cut becomes appropriate over the coming months as far as the Fed is concerned. Brexit presents its own challenges.

In addition, analysts have been looking throughout 2019 to see U.S. economic growth slow because the lofty rates of expansion induced last year by President Trump’s tax cuts were always going to be impossible for the economy to overcome without any further stimulus. Many manufacturing companies are now having to pay 25% tariffs on goods imported from China, which are crimping profits.

The prospect of easier monetary policy in the U.S. has also sparked a recovery in global stocks as it also means support to these currencies apart from easier pro-risk flows.

The Federal Reserve has raised its interest rate nine times since the end of 2015 including on four occasions in 2018, much to the ire of the White House which has been trying to stimulate U.S. economic growth using tax cuts and other fiscal policies. The last rate hike was in December 2018, which left the Fed Funds range at 2.25%-to-2.5

Bond dealers and economists are certain that the Reserve Bank of India (RBI) will lower the policy rates in 2019 though there is disagreement on the timing.

The rate can be pared right now to give growth a push, but is possible that the six-member Monetary Policy Committee (MPC) prefers to pause till the Union Budget in July. By then, those who prefer a pause in the June 6 policy say monsoon-related uncertainties would be clear, too.

The policy repo rate is now at 6 per cent. Retail inflation is 2.92 per cent in April and GDP printed at less than 6% which is fairly anaemic. Economists largely agree that inflation is not a concern area for now, but growth is and the government would need to focus around that. Oil prices remain a big uncertainty as usual.

Economists have been unanimous in  their belief that not cutting rates post the demon has led to the current low growth environment and while the debate has its pros and cons, it is increasingly unlikely that the RBI wont act especially when sub 6% rates are printed.

What do you do NOW ?

Such powerful impulses driving potential rate decreases across the globe means one would definitely need to be positive on long tenure bonds/ bond funds – and while the timing is not known, it is fairly likely that one would see good returns from such portfolios. Even beyond what has already happened.

With inflation under pressure globally, we expect emerging markets to benefit from demand diversion – and profitability to improve. This in turn means a benign rate environment as well as narrowing of risk spreads.

Also, the Indian bonds are trading around historical spreads from US bonds – and any risk based repricing against India looks unlikely minus a very bad monsoon – which could impact the fiscal deficit laxman rekha. Minus that, and we have little reason for Indian bond yields to go nuts. 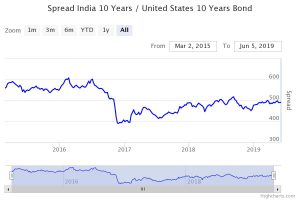 If your risk appetite is slightly higher, choose from amongst the excellent credit funds which will benefit once corporate growth resumes and yields on AA paper versus GOI Sec narrows. Email us at wms@plindia.com for recommended credit funds as well as long duration bond funds – which should deliver much higher returns than deposits over a 3 year horizon. Download the picks summary from https://www.plindia.com/SampleReports/MUTUALFUND/finalRecommendation.pdf

For the more informed and aggressive investors, Prabhudas Lilladher offers debt PMS schemes as well which are curated to select some good quality paper available at sharp discounts to their fundamental value.

Our advisory desks, advisorydesk@plindia.com , can also help you buy select bonds from the secondary markets so do stay in touch with us to build your portfolios.