This quarter’s sell-off in crude oil prices (starting October 3, 2018) has been massive with Brent oil falling more than USD 25/bbl from its highs. The commodity’s collapse occurred with such blinding speed that its 50-day and 200-day moving averages are on the verge of completing a “death cross” in confirmation of this bearish momentum. Meanwhile, its 14-day Relative Strength Index (RSI) are lodged below the 30 level denoting “oversold” territory — its longest such consecutive stretch in years. The question – is there some indicator that has a predictive power to tell us what happens next!

Introducing the Commitment of Traders Report?

The US Commodity Futures Trading Commission https://www.cftc.gov is responsible for the surveillance and integrity of the commodity derivative markets and players. As a regulatory requirement, the largest futures traders in the world are required to report their positions to CFTC which can easily be tracked due to the margin they must pay to hold their large positions . The CFTC has been publishing this information publicly since 1962 and since 2000, every Friday at 3:30ET pm

This information can be of extreme help due to the people who come into the Futures market like hedge funds to make a return above their respective index or some of the largest companies in the world with real-time data of the health of the economy that come to the futures market to hedge their exposure to price fluctuations of raw materials that they use to make their product.

This report therefore provides incredible levels of intelligence that you’d be hard-pressed to find in another avenue including technical analysis etc – and may be useful as a sentiment indicator.

Who Are the Players In The Report?

Non-Commercials (Speculators / Funds) – Traders, whether hedge-funds are large individuals, who have no interest in taking delivery but are rather in the market for profit and meet reportable requirements of the CFTC. Examples: Hedge Funds and large Trading parties

How to Read the CoT Report for Directional Bias?

There is a lot to learn about the Commitment of Traders report and that cannot be covered in this blog but what’s often helpful is to find when there is a very strong divergence between large speculators and large commercials. The divergence often asserts itself in prices over a period of time, typically 2-6 months and may be useful as a predictor of trend reversals. Typically, the speculative category open interest is more useful especially.

Crude Oil displayed this reversal probability using COT data charts twice (see below) in the last 30 months and we show you how below: 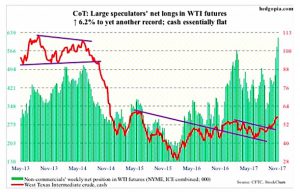 ney was betting against Energy price rises late last year. As WTI crude went above $50 last year, the Commitments of Traders (COT) data was showing a record net-short position among smart money in the crude oil futures market. When crude started rising beyond $60 a barrel, these hedgers increased their short position even more. At higher levels, hedgers had to start buying back their short hedges. This short covering forced buying, which could a big part of what fueled oil’s move. Long positions continued being created into 2017 and this started giving a base to crude oil futures possibly leading to further rises.

The smart money group appears to have been preparing for the current bear market in oil as they starting paring their exposure to crude since the start of July 2018.

The chart below shows the  comparative behavior in Open Interest for natural gas which traded at multi month highs versus Crude Oil where Open Interest dropped precipitously.

As of the latest reporting date in  2018, this smart money was holding their smallest net long position on oil futures in 17 months. Thus the long unwinding trend has continued. So far.

Interestingly, the options behavior for US Oil (USO) has begun showing increased call activity and now the call buying has increased to its highest in the last 3 years. This could be one reason why Oil has been showing bounces around current levels. Its possible that options buying, which is designed to be a limited risk activity, may be the harbinger of expected stability – or if another round of major long unwinding is on its way when oil drops further?

Keep track of the COTs report and whether the above charts show any reversals – as there could be a big move coming in the next 3 months if the options data shows a divergence beginning to build.