Yesterday, Feb 24 2020, brought US Yields to almost their decadal lows and the US Dollar Index close to a critical benchmark of 100 – even as Gold pushed to multi year highs.

Gold has been on a linear rise since last year when we forecast a level of USD 1700 or so (Read https://www.plindia.com/blog/gold-prices-keep-an-eye/). However, the recent rise of the USD – which should be negatively correlated to Gold from a historical perspective – makes us wonder whether this march is going to end soon? 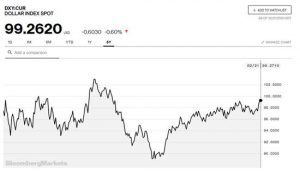 The Rise of the USD

Since mid-January 2020, when the outbreak of the new coronavirus took hold of global attention, the dollar index, which measures the greenback versus a basket of major currencies, is up around 2.3%.  Growing coronavirus fears saw the dollar crowned the big winner in currencies last week, and analysts are expecting further rises — primarily due to a lack of alternatives.

The United States has been a beneficiary of risk averse monies since the latter part of 2014, a time that the eurozone was experiencing some economic and financial distress. For the last three years, however,global investors have been wondering when the dollar would weaken. That is especially true for fund managers invested in emerging markets. A strong dollar is a headwind for emerging markets, and a hard sell to bring in new money to emerging market portfolios which tend to underperform when the dollar is too strong.

That’s the tweet that President Trump hasn’t managed to influence global markets with! Remember, he has long been an advocate of a weaker dollar and  that’s far from playing out.

The factors behind the currency’s rally — a rally no one in the emerging market world hoped would happen, at least — are varied. Some of those are:

b)Dovish central banks: While the Fed hiked in 2018, the rest of the world was either on hold (Europe) or cutting (Brazil, Russia, China…). In 2019, the Federal Reserve reversed course and cut rates, but other major central banks were still cutting so the net impact on dollar demand was unchanged.

c)Demand for U.S. assets: Global attraction to U.S. based assets is another tailwind for the dollar. Rising protectionism and geopolitical tensions influenced demand for U.S. Treasuries within sovereign bond funds and a preference for U.S. equities among global investors who have been greatly rewarded for putting money to work in the S&P 500, Dow and Nasdaq, all at record-breaking highs.

d)Weak Global Growth: It could also be mentioned that the political situation in Europe has not helped confidence in the euro as Angela Merkel has seen her political legacy weaken as the economic situation in Germany, as well as her efforts to leave Germany with a political heir, have not fared well. Furthermore, President Macron in France is having political difficulties, while the situation in Italy is even more chaotic than usual. The three largest economies in Europe are all having problems.

Japan’s worse-than-expected GDP growth rate for the last quarter is another worry. And economic activity in  China is at a standstill.

If you want another reason for the rise in the value of the dollar, the argument can be made that the fact that President Trump was acquitted at his impeachment trial was looked on with positive eyes by the financial markets.

For one, investors believe that the disruption connected with the removal of a president from office has been avoided. In addition, the president’s poll ratings have just reached a new high as in the latest poll, 49 percent of American votes approve of what Mr. Trump is doing.

The Impact of the Virus

World markets have banked on the virus impact being V-shaped — a sharp economic decline, then a swift rebound. IMF director Kristalina Georgieva said that scenario was still possible. But depending on how far and fast the virus spreads, the outcome could well be “like a U curve where the impact is somewhat longer”, she has warned.

Not all forecasts are so benign. Were this to become a pandemic, as per Goldman, the fallout could approximate “the entire US workforce taking an unplanned break for two months”. JP Morgan has slashed their global GDP growth projection for the first quarter of 2020 in half. In China, to a 1% annualized rate this quarter from 6.3% pre-outbreak.

A Word on Gold

For 10 years, the USD and Gold traded inversely, but then during the second half of 2018, both started rising together. One reason for this could be falling yields. Gold offers no yield and pays no interest so it rises typically when real bond yields are falling.

So the unusually steep drop in Treasury yields from the second half of 2018 to the present has boosted the price of gold; and helped offset the usual depressing impact of a rising dollar. A day before this blog is being written, the benchmark 10-year US Treasuries bore down on a record low. As a result, the US yield curve, watched by investors for indications of an impending recession in the world’s largest economy, was its most deeply inverted since October 2019 as the rally in Treasuries intensified. The 10-year yield fell 11 basis points to 1.37 per cent, within touching distance of the historic low of 1.32 per cent it set in 2016 after the UK’s Brexit referendum.

Gold also responds to the trend of stocks. Investors usually buy gold when they’re nervous about stocks, or when stocks are in a serious correction.

Investors have been buying defensive stock market sectors like consumer staples, utilities, and REITs; as well as traditional safe havens like Treasury bonds since the start of the year. They may be buying gold for the same reasons.

Not All May Be Well

A surging dollar doesn’t appear to be putting the brakes on an equity rally that’s pushed major U.S. indexes to all-time highs despite some periodic volatility tied to worries about China’s COVID-19 epidemic.

The dollar’s strength comes at a bad time for America’s multinational corporations. It can weigh on their foreign earnings, which are converted back into the US tender for their earnings reports. News of US junk debt at all time highs and near term impact of China on US activity may not be discounted fully as well as the impact of the Virus may not have been fully felt as Patient Zero remains unidentified in most nations.

A rapidly strengthening U.S. dollar can be a source of discomfort for stock-market investors for a few reasons. Most obviously, a stronger currency can make U.S. exporters less competitive overseas and dent overseas earnings for U.S.-based multinationals.Beyond earnings, a stronger dollar also represents a de facto tightening of monetary policy,

Paired with the cost of the virus outbreak, this could be a double blow for companies.

We have been recommending accumulation of stocks from around 10,800 levels with a clear eye at 12,400 on the Nifty. However, our analysts now believe we are in a rocky zone where the 200 DMA at around  11600 can easily be  touched. We therefore recommend clients to continue to protect long term portfolios with the purchase of puts on the Nifty.

We also continue to believe that Gold will continue to move up in the near term as any reversal in  the USD even as  the virus outbreak continues would provide even more support. We strongly believe clients should continue to invest at least via an SIP route into Gold ETFs as the twin impact of global headwinds as well as weaker INR would propel INR Rates of gold to higher levels over the next 5 years.

In case you believe US stocks continue to offer value, we are also launching our international investing website soon for our clients!