Feel like bottomfishing in Midcaps on small rallies? Our charts show otherwise- Whats happening right now is the breakdown of a 4 year old trend and hurrying into midcaps over largecaps may be highly risky. Given the losses on portfolios, it may be prudent to wait a while and have a clear preference to largecaps which incidentally offer huge value in some cases. Read our latest research and top picks at www.plindia.com/research.aspx

The Midcap Index has had a stellar run since 2014 – to compensate for underperformance versus a global rally that had begun in end 2012 or so – but this year, in January 2018, simple quantitative indicators showed the Midcap index giving a temporary short signal relative to the Nifty (Intermediate Sell)- This , even as we gasped for breath at the speed of corrections, then converted to a full blown (Longer Term) Sell signal in May 2018.

The Cyclical Indicator charts (Based on Relative Midcap to Largecap Indices) show that the Midcap Index is , on a relative basis to the Nifty, still in bear territory and while there may be shorter term rallies, the index has not given any reason yet to prefer Midcaps over Largecaps at the current juncture.

The chart shows that the bull rally that powered midcaps versus Largecaps , starting in May 2014, reached a temporary low by May and then instead of a bounceback like the previous 4 years, descended below the bottom red line confirming the break of a 4 year old trend – May 2018 was a major trend change.

The red lines indicate points at which 50DMA crossed over the 200 DMA and generated simple momentum signals on the Midcap Vs Largecap trade. As long as the DMA Differential (The second chart below) lies in positive territory, any rallies in Midcaps will remain “Sell On Rise”. You may make mistakes but the weight of evidence has to be strong enough for you to take risk and till it happens, stay with Largecaps and be very selective. 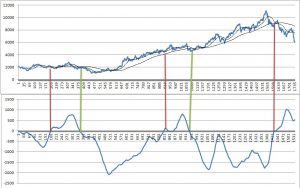