But with GDP printing at multi year lows since 2013, there is a question now in most minds – where may be the bottom if a cyclical market downturn comes! Would be see 9k levels again or is 11k the base on  the Nifty?

Our quick read of available information shows that this bottom is at 10,000 levels for the Nifty! Anything lower doesnt seem likely in the foreseeable future for multiple reasons.

A) Flows will continue

While the Nifty is up 12% this year, both the Nifty Midcap 100 and the Nifty Smallcap 100 indices are still down 5.2% and 11.7%, respectively. Just about the top 20 stocks have  been positive and a broad swathe of the market remains in the red.

The market cap proportion of ‘A’ group shares on the exchange has surged to 94 per cent, the highest since 2000 – as against the long-term average of around 84 per cent.

This, in the face of multi year high foreign inflows!  At ₹93,349 crore, until December 17, net inflows of foreign portfolio investors (FPIs) into the Indian equity markets have been the best in the last five calendar years since 2015.

“Some $1.15 billion was added to U.S.-listed emerging market ETFs that invest across developing nations as well as those that target specific countries in the week ended Dec. 13, more than eight times the $141.9 million inflow in the previous week, It was the 10th straight week of inflows, the longest streak in a year.” – Bloomberg

Optimism is increasing about the growth outlook, which includes an upward revision of China’s consensus gross domestic product (GDP) forecast for 2020, large optimism over Brazils control over its deficit, recovering agri exports from Argentina and a very expansive Mexican economy.

So what is driving this divergence between broad markets in India and FPI flows? According to global analysts, from a 2021-2023 perspective, India and Korea will be the largest surprisers on the EPS Growth front and estimates of a 25%–27% growth unto 2023 are already embedded in their “black boxes”.

However, given the  uncertainty over domestic recovery as evidence is not available over any such strength , most of the money is finding its way into safer indices based stocks , especially the HRITIKs as they are called, driving the assymetrical return from Nifty yet again this year against the common belief at the beginning of 2019 that broader markets will outperform. Plus the fact that a large amount of this flow is emanating from Index ETFs and not discretionary funds.

It is likely , for many reasons as per our earlier article, that these flows will continue (Remember – The biggest trigger for even larger flows is the weakening of the USD – The Dollex has stayed in a tight range and a breakout from  this range of 92-97 holds the key to what happens to emerging markets) especially if the US China trade imbroglio resolves itself and continue to provide support at around current levels despite the overcrowdedness.

IPOs from large players will also absorb some of this excess liquidity. The RBI positioning on currrent levels being just about “fair” value on the USD INR is also providing comfort that exchange rates may not play spoilsport thus prompting FPI flows.

b) Valuations- Stretched Near Term but comfortably placed over 2 years

A  recent note by Amnish, who heads the Prabhudas Lilladher research desks, has come out with a Nifty outlook of 12993 levels over the next one year. Others like UBS, Credit Suisse et al have also maintained an outlook of between 13000-13500 levels over the next 12 months primarily predicated around a 27% EPS growth in FY 2021, versus about 12%-14% in FY 2020,  led mainly by Banking and Auto.

Given that the India premium to MSCI Asia has stayed reasonable between to 35%- 40% , there is an increased confidence with respect to a valuation buffer as well.

However, given that we are , on one year forward earnings, currently trading at a multiple of 18.6 on one as compared to a 10-year average of 15.5 times x, there is this slight discomfort on what happens if the rural economy doesn’t indeed do well even after a bountiful monsoon or that the US China trade wars continue to impede external stimuli. This may directly put the FY 22 consensus estimate Nifty EPS of 760 Rs directly at risk.

Of course, the changes in  estimates over the course of FY 2020 with a view of FY 2022 can shape markets during CY 2020 but we believe the momentum from a recovering economy will most probably and meaningfully solidify these assumptions and even if a mid teen EPS growth number for FY 22 were to be factored in , we can easily trade in the 12k-14k levels.

We ran some past data analytics (From July 2007 to November 2019) to see how the market behaves versus its 200 DMA as well as its highs across different time periods. Note that this period includes sideways stalled markets of 2012-13, the demon impact, the emerging markets collapse and so on- therefore serves as a good indicator of the range markets can occupy over periods of time.

There were some interesting insights in this amongst which the main ones are as follows:

TABLE: MARKET CLOSE AS  % OF 200 DMA AND PROBABILITY 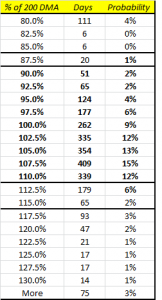 Of course, any market declines over longer periods mean that the averages may themselves shift lower , and  therefore the extremes as well, but then note that we have assumed 85% / 80% to arrive at the 10k levels above which themselves are extreme cases – and can  only happen with a large continuous negative news flow and developments.

Therefore our quick conclusion – No matter how many negative newsflows occur right now, plan your investing with a Nifty assumption of 10k as the worst level possible in the future – we believe this level has finally and possibly been captured forever!

Our Research teams spend a lot of time digging for gems and we encourage our readers to discuss mid to long term portfolio ideas with us by mailing us at advisorydesk@plindia.com or by visiting us at https://www.plindia.com/LatestReports.aspx