The last one week of market collapses is the fastest fall of 10% or more ever seen. It puts other notorious falls in the market, (the Asian crisis of October 1997, Black Monday in October 1987 and the bursting of the dot-com bubble, in April 2000), in the shade.

The US has been where the biggest drops in financial terms have been most eye-popping – and some $6 trillion estimated to have been wiped from the value of global stock markets this week. We at PL have been talking  about a sharp correction since January but now that its happened, the question – are we near the end?

The Covid 19 outbreak has been at the epicenter of news and this virus gets the most blame for obvious reasons.It is scary to imagine what would happen if no one had a treatment for this and it spread uncontrolled. Question is – Can “the flu” continue to spread uninhibited with the serious actions already taken , the global alert levels and of course downright brutal quarantining in some countries to ensure no further contacts from Patient Zero?

Apart from Covid, however, a lot has happened over the last one week which could have made markets shaky including a strong Democrat challenge to the Republicans which  could impact the results of the US elections, an  array of Fed personnel who said rate cuts are further away in the midst of a strong US economy, the refusal by East Asian central banks to cut rates amidst anemic growth and of course the impact of the already shut Chinese factories on Q1 global growth.

While a lot of this can be balanced out by optimists (Crude to 49, Dollex at extremes, Yields at multiyear lows and so on), the coronavirus has acted as the one open ended issue which continues to bleed markets – investors have no visibility as to how the COVID-19 outbreak will play out. It is impossible to say how many cases will emerge, how many victims the virus will claim or the extent to which it may take off in individual countries.

And that’s possibly where the algorithms come in!

A steep market fall of more than  900 points in the US got reversed in just the last 20 minutes or so on 28th Feb 2020– no news emanated- and  one therefore wonders whether this is machines doing all the thinking! And worrying on our behalf!

Algos and the Infodemic!

It is well known that social media is driven by processes favoring extreme views, which make them spread faster and wider than more reasoned judgments. Consider a recent claim that a COVID-19 epidemic could infect 60% of the world population that is spreading through social media and reaching mainstream news outlets. While it certainly generates a lot of clicks, the World Health Organization has denounced it by saying “every chance we get we seem like we want to accelerate the infodemic.”

Algos pick up sentiments from such news and go whole hog into a unidirectional bet – and with low institutional volumes, they have  a field day!

These advanced algorithms also work the other way: Once the fear passes, sentiment swings, investors see an opportunity in battered stocks, trading systems begin to push the market in the other direction. After the late 2018 crash, for example, the US market recovered fully within a couple of months.

Past Episodes and Aftermath

Past episodes show that such sudden price declines are more often that not accompanied by almost a V shaped recovery barring the 2008 financial crisis which was a longer term issue throwing economies out of gear. 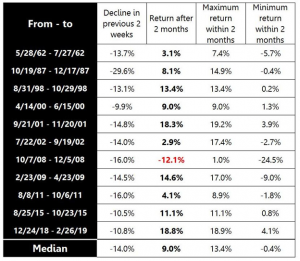 This historical picture does not guarantee that the market will recover. But let’s consider how much happened in the period: the Cuban missile crisis, the oil shock of the 1970s, the crash of 1987 (still a record), 9/11, the burst of the dot-com bubble of 2000-2001 and the financial crisis of 2008. Despite all those vastly significant events, the market never fell as quickly as right now.

Covid: What Happens Next

At some point it seems legitimate to ask whether the market is right at reacting so violently to the threat posed by the coronavirus strain . Experts from the faculty at the Boston Children’s Hospital’s Computational Health Informatics Program note that the SARS or Severe Acute Respiratory Syndrome, also caused by a strain of coronavirus (officially: SARS-CoV) with higher contagion rate and much higher death rate than COVID-19, “had no vaccine, no specific care approach, and we still managed to get the situation under control.”

This is a ray of optimism. Also, the spread of the virus through mainly a cluster of Italian and South Korean contacts means the virus is still not in the open – and may still be controllable – if the governments play their moves right. This is why WHO has , while obviously marking out the global risk, refused to call it a Pandemic.

The potential therefore of an early price bottom setting up after this 2020 price collapse is very real.  However, the scale and scope of the Corona Virus event, should it continue beyond the next couple of weeks, could extend the price decline even further. Ultimately, this extended risk function may push the US and global markets to much lower levels.

Technical analysts can visually identify capitulation using candlestick charts and other indicators. Hammer candles often form at the end of a selling frenzy when the lowest price is made, as capitulation sets in and signals a price bottom followed by a reversal bounce on heavy volume. Traders who wanted to sell their positions have done so as panic reached a climax. As fear starts to subside, greed may set in and reverse prices.

Capituliation strikes when the victim is already down and bleeding, begging for reprieve. We’re talking after a stock has already been beaten senseless driving the RSI and other such oscillators into the proverbial basement. The Stoch RSI for Nifty on the daily and  weekly charts are well below 20 and could be indicating a near bottom.

For true capitulation, you need urgency in the selling. You need a ramp in actual market movement to signal emotions are running hot, and support zones are melting in the face of the fiery descent. The ramp in realized volatility can be seen in the Average True Range (ATR) indicator. You would  be surprised to know that on the weekly scale, the ATR  over the last one week is one of the highest placed in history!

There’s a reason volatility measures like the VIX bear the nickname “fear gauge.” Skittish investors desire protection and are often willing to pay absolutely ridiculous prices for it! This demand for put options drives implied volatility to the moon, thus tipping off spectators that peak panic has likely been achieved. 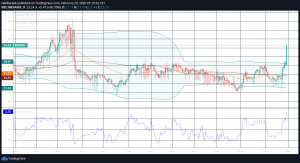 Did you see implied Nifty volatility this week? It shot through the roof and far above the normal 2 standard deviation mark one would like it to remain within.

The daily charts on the Nifty show further downsides to possibly 11000 levels but also that we may well be within the stabilization range.

At the same time, the weekly charts show a possible halt at the current levels unless global  markets plummet sharply next week – and if this were not to happen, we might stabilize around current levels and attempt a recovery unto March end.

The monthly charts are however scary! If the 11000 levels were to break for some reason, nothing much prevents a fall right upto the 10200-10400 range though one would ascribe a 30% probability at the maximum to this event. 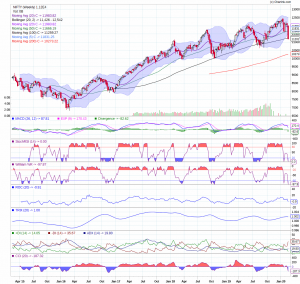 So what do you do?

We had earlier been negative on markets ever since Nifty started displaying fatigue and we expected a fall to somewhere around current levels. Of course one is taken  by the speed at which this has happened but then so far, markets have behaved as per the “grand design”.

Global markets also possibly had to shake off complacence and the Covid 19 virus proved to be the trigger that allowed a readjustment to start. Weren’t analysts already talking  about preparing for a US slowdown or a drop in US bond rates and so on?

So for now – one could think that this is not a global depression in the making but just a readjustment – unless more newsbreaks prove this wrong. For now, we would look at this as an algorithmic driven technical trade at a global  scale that has pushed the panic buttons and  Covid just happened to be that one singular global trigger.

Our advice – take profits on bear trades and move to cash slowly. And wait for sharp volume days to confirm if markets are exhausted on their way down OR willing to bet their way up. Start deploying money into good largecaps slowly or if you want to diversify, largecap mutual funds or Portfolio Management Schemes (mail us at wms@plindia.com for information).

Second, avoid deploying new bear trades. It’s always darkest before the dawn. Moreover, the risk-reward for new short trades at this point is terrible so avoid the temptation to chase unless you believe 10k is on the way. We would rather that you create hedges even  now with a fixed premium buy of Puts than going blunt naked short!

Third, consider contrarian bullish trades like naked puts or bull puts to capitalize on the sky-high volatility and chance at a rebound in the stock price. Our analysts can help you build these trades and you may mail us at info@plindia.com to understand what we can do to help.

All this could go terribly wrong and we could head to 10,000 levels but then, the only guides to the jungle are in  our belief that 1) We can  fight the epidemic and 2) History has seen worse times and nothing changed for the world!

Long- and short-term investors get killed in market meltdowns because they change their plan in the middle of a trade. The long-term investor loses because he sells too quickly while the short-term trader fails because she holds too long. As the old cowboy saying goes, never change horses midstream. Your trading plan should always account for the inevitable market meltdown. It’s a market cliche and it sounds corny saying it, but “plan your trade and trade your plan.”

Our Algorithmic desks are always on the lookout for major market moves through our trained and disciplined index trading product, Traders Edge, and we welcome you to read more about this at https://www.plindia.com/TradersEdge/

If you are an intraday trader and want to improve the extent  of information you have for this to become even more profitable, try out our stupendous tool TradeClue – Visit https://www.plindia.com/tradeclue

And yes, in the meanwhile, lets pray together for the lives and families of those impacted by the Virus and that they get well soon!