After being a market laggard for more than a decade, steel sector suddenly became one of the hottest sectors on the bourses. And again China has a played a major role in this rally.

As witnessed, after every recession China is the first one who starts reviving the economy. Similarly this time also, after the COVID breakthrough, China came up with a huge infrastructure stimulus along with their latest policy to discourage polluting industries in the country, including steel. The Chinese government has withdrawn export subsidies on over 100 products including hot-rolled steel. The government also cut import duty on steel imports into the country which became an immediate reason for the rally in Indian steel stocks.

This move by China raised steel prices globally and reduce steel exports from China, benefitted Indian steel producers as it directly improved the export opportunity for Indian steelmakers and compensated for declines in domestic sales volume due to COVID. 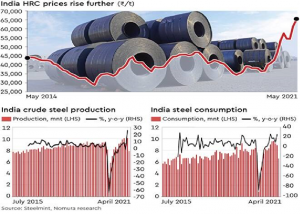 The steel industry turned out to be a tale of two halves: the top steel producers with iron ore mines were in a sweet spot, while the smaller and secondary producers were unable to make good of the commodity boom.

Steel production in India is dominated by the large integrated steel producers who use iron ore as the basic raw material to make steel primarily through the blast furnace (BF) route. The small, medium and secondary producers generally use sponge iron (produced using the direct reduced iron route) or scrap to make steel through the electric arc furnace (EAF) and IF route.

These latter producers are, however, in a corner because of a supply crunch in iron ore. The problem started with the auctions in Odisha early last year. About 19 mines were auctioned by the state government, and companies agreed to pay a premium of 94 to 150 per cent for captive use and as merchant miners. Steelmakers — JSW Steel and ArcelorMittal Nippon Steel India — also bagged mines in the auction; among top producers — Tata Steel and SAIL — had legacy mines.

“The high premium is unviable for merchant miners and not a single merchant mine is in operation,” pointed out the head of a sponge iron association. There came a supply crunch coupled with huge ongoing demand from China. China imported 44.8 mt of iron ore from India compared to 23.8 mt in 2019 and was the most in nine years.

What happens when supply is low and demand is high? Price increases!. A similar thing happened in iron ore leading to more hike in steel prices.

Global iron ore prices are now at a 10-year high. In the domestic market, NMDC and Odisha miners increased prices 162 to 192 per cent, but this is still at a discount to international prices. Prices of scrap also increased by 115 per cent to $457 a tonne, data by iron and steel research company SteelMint showed.

The steel industry is highly cyclical. If we recall, 2015-16 was one of the most difficult years for the industry when margins fell to unsustainable levels and various trade measures were enforced by countries globally on the steel trade. As a result, there was no availability/ appetite for risk capital and new capacities were not created.

But since July 2020 — after the nationwide lockdown to contain the pandemic — domestic prices have jumped 83 per cent (but still at a discount of ~8,000 a tonne to landed cost of imports). Since the unlocking last year, large steel players ramped up capacity utilization gradually and are now operating at more than 90 to 100 per cent capacity. But most secondary producers are still hovering at 60-70 per cent. The share of top six steel producers in crude steel production, which used to hover at 55 per cent, stood at 63 per cent in FY21. 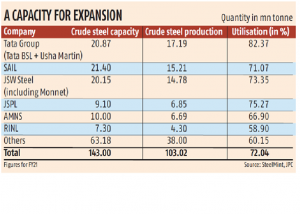 The trends indicate the rising dominance of large steel players in the domestic industry and an adverse impact of the pandemic on the business performance of smaller steel producers including secondary. The pandemic has exacerbated the situation in more ways than one. When the lockdown happened, the large steel players stayed afloat by diverting to the export market. But secondary producers are dependent on the domestic market and were practically shut in April 2020 and then restarted from May.

This also led to more M&A activities as mine ores were demanding huge premiums and players who couldn’t survive the cycle went to NCLT.

A squeeze in global steel supplies and high demand has increased steel realizations significantly for Indian steel companies driving higher profits. This cycle has even given the highest profits in last decade.

This jump in profits has helped companies to cut debt and increase capital expenditure for the growth. According to CRISIL, the top 5 steelmakers are set to cut debt by Rs.35,000 cr.

Now China has even removed the export rebate of 13% which will further increase the steel prices and in turn it will directly flow into profits and returns will start improving more.

Now what happens with valuations?

We consider EV (enterprise value) while taking steel companies into account as they are debt ridden. EV is market cap + debt – cash. If we keep EV value constant and debt keeps on reducing then the amount will directly flow to market cap.

Now market cap is total number of outstanding shares multiplied by market price of share. Number of shares cannot be changed so the share price will automatically start heading north!

For our latest top picks in the sector or to understand more, write in to us at advisorydesk@plindia.com!