If you are a regular trader in stock markets, Tuesdays seem to be a good day to take off and focus elsewhere! Unless you are into shorting markets in which case Tuesdays might be a good time to be glued to the screens!

To try and figure out whether there was anything like a good day for stock markets, we took data from January 1 2015 to see how many days had a positive close  (Both versus previous day – closing basis- as well as from the open for the day, that is a white candle was formed).

While the data doesn’t show the best days to invest in, for some reason, its Tuesdays that stand out as the day NOT TO BE in markets! 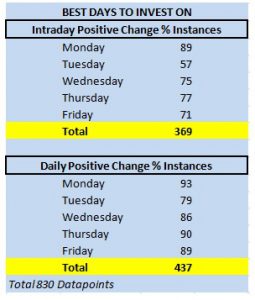 Of course , Tuesdays also make money in both situations after all – but from a probability  point of view, they have the lowest chance if you were thinking of which day is best!

Of course one can read into this data a lot of ways (like Mondays are strong so Tuesdays aren’t, OR Intraday returns and End of day returns are correlated so not really two datapoints but just one and so on) but the fact remains- Do something else on Tuesdays if you don’t  have solid trading ideas!