What is a channel? Trend channels consist of at least two trend lines that connect the swing highs and the swing lows of a trending or a sideways moving market

It’s a relatively well defined price range that a stock (or other security for that matter) trades within over a period of time. Generally speaking, there is no universally accepted time horizon or percent range that defines a channel. Instead, a channel can be identified when a security often touches a high and low price several times, but does not move outside this range—typically for at least a few weeks or months to be reliable. Chanenls can often reveal potentially important price levels, from a chart analysis perspective.

It’s important to understand that trend channels don’t have to be absolutely parallel and it’s possible that one side of the trend channel is a horizontal support or resistance – in such a case, we typically speak of triangles or wedges. More on  this later.

When drawing the trend lines you can use both the wicks and the bodies of the candles- it’s not important to draw perfect trend lines, but more to generally find trend lines that describe price action and trends. 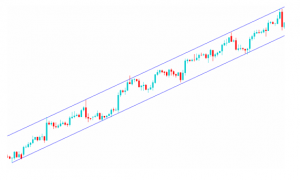 Channels provide a clear and systematic way to trade by providing buy and sell points.

2) Waiting for the breakout of the trend line

There is no right or wrong here and both are valid concepts as long as you are aware of some general principles.

When you look for a bounce off a trend line, always wait for a confirmed bounce. Or if you are a breakout trader, you should make trade decisions on the close of a candle. Often, price will just penetrate the trend line and then fall back into the range. Breakout traders could lose a lot of money on false breakouts.

The channel forming around the CNX Midcap Index seems to be a well defined one as the attached chart below shows. See the chart carefully and decipher for yourself what you wish to believe may unfold over the next few weeks: A temporary recovery, a disastrous drop or a complete recovery? The Corridors of uncertainty are yours to negotiate!

Channels provide one way to buy and sell when the price is moving between trendlines. By encapsulating a security’s price movement with two parallel lines, it is possible to generate buy and sell signals, as well as stop-loss and target levels. How long the channel has lasted helps determine the channel’s strength. How long the price usually takes to move from high to low (or low to high) provides an estimate of how long  trades may last.