The first 10 days of May 2019 have been rocky for international markets – with concerns around the US withdrawal of waivers for crude imports from Iran spiking volatility and then the sudden escalation of the US-China trade wars which people believed were close to resolution.

MAY DAY! MAY DAY!

The Trump administration, early May 10, 2019, more than doubled a U.S. tariff on $200 billion in Chinese imports, from 10% to 25%, sharply escalating a trade war between the two countries.

Importantly, the US president also threatened to slap a 25% tariff on almost all the remaining $325 billion in goods shipped in from China.

Higher tariffs took effect one minute after midnight on May 10 New York time, on all imports from that time (and not shipments in transit).

Multiple news agencies had reported that China had abruptly backed from signing large parts of the 150-page draft deal on Friday, making unexpected changes at the last minute. Apparently, the team representing didn’t want to or didn’t have the authority to sign – and all this remains unclear as of the time of writing this piece.

China said it would respond with unspecified countermeasures.

This move have pushed “the weighted-average applied U.S. tariff rate” — once among the lowest in the world — to just over 4 percent, higher than the Chinese, Russian and Turkish figures.

Differences remain on U.S. demands for structural change to the heavy involvement of the state in China’s economy — and for China to enshrine its concessions in law which it is refusing. The U.S. is said to be frustrated with what it considers to be China’s backpedaling, including on the crucial matter of forcing foreign companies to hand over technology.

China wants tariffs at much lower rates across the board.

Trump may have been proven right so far – that the tariff impact is positive. American shoppers have so far been insulated, as inflation remains tame and the tariffs haven’t hit staples such as clothing, footwear and toys. A better-than-expected U.S. gross domestic product number in the first quarter had the economy growing at an annual 3.2 percent, in part because of a full percentage point boost from net exports. And employment data showed the U.S. added 263,000 jobs in April.

On the other hand, China’s economic growth has been slowing in recent years.

But China’s economy rebounded through the first quarter of 2019, offering the government there more room for maneuver in the trade talks. Authorities in Beijing have already promised almost $300 billion of tax cuts to stoke growth and are said to be considering other stimulus measures to bolster sales of cars and appliances.

To worsen things for China, Bloomberg Economics calculates tariffs at the current 10 percent add up to a 0.5 percentage-point drag on China’s growth this year. An increase of 25 percent on $200 billion in Chinese exports would raise the drag to 0.9 percentage points and tariffs on all of China’s exports to the U.S. would increase the burden to 1.5 points! That’s around 5% annual growth – a number one doesn’t associate with China.

The US may not be spared however if China slows down- companies like Apple, Starbucks, Volkswagen and FedeX are amongst those that have recently all cited a slowing Chinese economy to impact earnings. More than 400 publicly traded Chinese companies warned recently on their earnings.

The IMF, cutting its forecast for the world economy for the third time in six months due in part to trade tensions, said in April that global growth would be 3.3 percent in 2019, which would be the weakest since 2009.

One theory doing the rounds , as recently as May 10, is that the Fed could cut interest rates if a trade fight begins to hurt to American economy.

Analysts say a rate cut from the Fed would be one of the few clear catalysts for higher stock prices in the near term, following the sharp run-up in share prices earlier this year and fast losing reasons to stay there.

The president’s hard-line stance this week helped to rebut criticism that he “sold out cheaply” to China – going into elections in  2020, that could be an issue. And maybe that’s why the tweet tantrum!

Unfortunately, President Trump’s favorite negotiating tool — high tariffs on imported goods — may be hardening into a permanent feature of the U.S. economy. And countries like India will sooner or later feel the heat. Already, Trump is considering raising import taxes on automobiles and a variety of products from the E.U.

However, for the president, the danger is that the economy’s current strength could ebb. Activity in the manufacturing sector, which has prospered under Trump, is slowing from last summer’s peak. In April, the Institute for Supply Management’s manufacturing survey fell to its lowest point since October 2016.

A strong dollar may therefore also not remain at its perch – and higher inflation  (less China imports and rundowns in inventory) followed by markets slowing down may present Trump with his biggest challenges just around election time.

Meanwhile, countries that are expected to benefit the most from the trade war are the EU members as exports in the bloc are likely to grow by $70 billion. Japan and Canada will see exports increase by more than $20 billion each, it said. Other countries set to benefit from the trade tensions include Australia, with 4.6 per cent export gains, Brazil (3.8) India (3.5), Philippines (3.2) and Vietnam (5) as per studies.

The Institute of International Finance in Washington released a report May 7, 2019., saying that its measure of emerging-market growth was tracking at a 3.6 percent annualized rate in April, up from 3.2 percent in March. In addition to the sizable jump, the IIF notes the increase was the first in 14 months.

The uncertainty is beginning  to show up in  other markets as well – Demand at the US Treasury’s auction of 10-year notes collapses to lowest since 2009 this week which points to higher rates – in conflict with market expectations of cuts.

All this shows the risk of a slowdown actually is higher for the US than China – and the timing may be very wrong for Trump. Or are the Chinese playing him along into a timeframe which doesn’t suit his election chances any more and therefore yields ground?

A strong US dollar and no relative change in fundamentals have kept international currencies at their lowest volatility levels – any decline in the  USD may trigger major realignments and  bring higher volatility in the second half of the year. 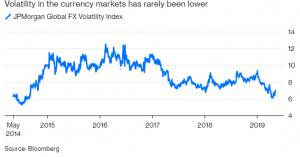 US negotiators have told their Chinese counterparts that Beijing had three to four weeks to reach an agreement before the Trump administration introduces the new tariffs on essentially all remaining untaxed Chinese imports. This means the earliest that additional new tariffs could be imposed would likely be mid-to-late June.

Chinese state media said that both sides had agreed to meet again in Beijing at an unspecified date.

Meanwhile, and as evident from the data pieces above, incremental evidence – barring knee jerk reactions from such news as through last week – continues to support the hypothesis that emerging markets are likely to do much better over the next few quarters irrespective of what happens to the trade wars.

Gold may find support as we head into this volatility so do keep your stop loss based trades on for a bounce- as it attempts to claw back from recent losses.

Mail us at advisory@plindia.com for updates on your portfolio or any queries or customised suggestions to counter this expected volatility!