Our earlier blog ( https://www.plindia.com/blog/where-is-the-rupee-headed ) had stated that USD INR 74 or so was likely before the year end, based on REER calculations. However, are we now playing at the fringes with a) RBI keen not to allow 73 or more being printed on the INR right now and b) USD Index (Called DXY) trades at potential reversal levels.

The success of the RBI intervention is contingent on what happens to the USD as history has proven that central banks are always bet against and a net importing country cannot waste resources trying to stabilize the currency beyond a point. As this blog is written, the US has already placed USD 200 Bn of sanctions on China and this could be the start of disruptive currency movements and it would be interesting to see what happens to the DXY Index. (Watch DXY live at https://www.bloomberg.com/quote/DXY:CUR)

THE DXY : A CRITICAL JUNCTURE

The US Dollar has been a solid outperformer and has been in an uptrend for a majority of the year with global fears running high and select emerging market currencies falling like dominoes. The USD INR pair itself is up almost 15% for the year and currently trades in the USDINR 72-73 range.

However, the next few weeks may see the resumption of major volatility in global commodities and currencies as the USD Index (DXY) borderlines some major technical chart patterns.  There is no consensus which way the USD will head once the deciding move happens as pro USD newsflow continues but if it were to break down, relief would spread across emerging market currencies.

The DXY (Dollar Index) is showing some very bearish conditions on its short to medium charts. There is a very bearish and long-term head and shoulder pattern forming as per technical analysts,  over the last two months. For the uninitiated, this pattern shows a transition from a bullish trend (higher highs and higher lows) to a bearish trend (lower highs and lower lows) and is often seen at significant tops in the market. With prices on track to close below the pattern’s “neckline” around 94.75, the pattern projects a possible move down toward 92.00 in time. 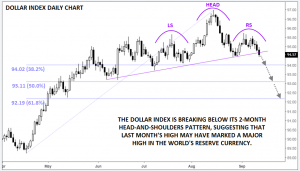 The DXY bulls need to see a break through 95.70 although 93.80 is becoming more and more into scope on the downside and therefore good news for risk assets.

A recent report from Goldman Sachs, Elliott Wave Theory suggests that the EUR/USD is likely to hit a small bump in the road from current prices before undergoing a bullish continuation after a long period of consolidation since May this year.

The natural interpretation – While the world’s reserve currency has remained within the recent consolidation range, the dollar’s correction could be deeper over the intermediate term which would provide relief to many inversely correlated assets that have been meaningfully underperforming in 2018.

Softer PPI and CPI data in the US, optimistic economic commentary by the ECB’s Draghi, and reports of the US reaching out to China on trade were recently helping to drive weakness in the US dollar and a rally in commodities and global equities.  The DXY (Dollar Index) has faced considerable downside pressure for the week as issues seemingly become a little clearer. The impending US and Canadian trade deal, by all reports, should be completed before October. The spanner in the works is however the US and China wars and  what happens in the immediate aftermath of the US Sanctions  on China.

Gold has also been waiting  in the sidelines its biggest enemy – the US dollar – is trapped in ranges on trade wars and risk-on-risk-off.  One can expect an inverse move soon in the asset once the USD becomes clearer.

A major indicator that could trigger the dollar move may come from OPEC which meets soon – the global surplus of oil has hit almost 100 mbpd (million barrels per day) as global oil producers produce at historic levels but prices have yet to come down – this could mean strong growth is under way globally and be dollar  negative. The other trigger could be announcements by the US Administration on fiscal spending which could weaken yields and the dollar.

Of course, its next to impossible to never endorse what may trigger the next move  but readers should keep their minds open to the possibility that the greenback may have seen its highest levels of the year last month. And if that happens, it is likely that the INR may see some pressure off and revert back to levels of around 70 on the pair.

The PL Mobile App allows you to take positions on most commodities (futures) and currency and you may wish to open trades now – knowing that we are at the cusp of what could be  a strong move in the USD soon. Download it now at www.plindia.com/plmobileapp

Read more about the Head and Shoulders pattern at https://en.wikipedia.org/wiki/Head_and_shoulders_(chart_pattern)