In an economy which was battling food inflation in double digits until a few years ago, demand was outpacing supply which was leading to very high prices of agricultural commodities. Farmers responded to this by increasing supply and were aided by technological advancements and agricultural reforms. The result is that supply growth appears to have outstripped the pace at which demand has increased.Food and beverages (including cereals, pulses and vegetables comprising 54 percent of the Consumer Price Index (CPI)) component of inflation was negative 0.8 per cent in October 2018 and continues to surprise baffle many.

Over the years, India has seen many a protest over rising prices of food items like onions and tomatoes. However, over the last two years, the situation has been dramatically different. Prices of food items have increased too slowly at times, leaving policymakers confused and farmers distressed.

This is strange because almost everyone was predicting a rise in food inflation once the government – possibly as a pre-election sop –announced MSPs (minimum support prices) for several crops. Everyone, therefore, expected a surge in agricultural prices. Instead, prices continued to climb down. And the question ‘why’ was on the lips of many.

Prices of 12 among the 14 kharif crops have ruled below their minimum support prices (MSPs) since arrival of the summer crop began, and in case of five of these crops namely paddy, tur, groundnut, niger and ragi, the prices have been on a continuous decline through the season.

So whats behind all this? We visit some major factors affecting the long term trend in this sector (apart from seasonality which is natural) 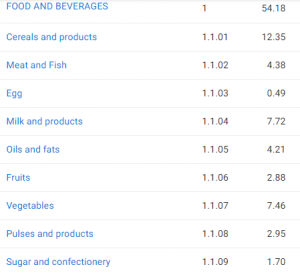 Kharif crops are almost at 141.59 million tonnes- 0.86 million tonnes higher than last year. In particular, production of rice, sugarcane and oil seeds is seen higher than last year. The output of key pulses, which has surged over the last few years, remains slightly lower than last year.Domestic production of sugar has risen to almost record levels. Coarse cereals seem to be the worst affected (Coarse cereals are a broad sub-group of several short duration warm weather (Kharif) crops such as Jowar (Sorghum), Bajra (Pearl Millet), Maize, Ragi (Finger Millet) etc.). Their prices are nearly 25 -30% per cent lower than the MSPs announced by the government. The same phenomenon is affecting onions as well.

Even in dairy, there is major distress, both locally and internationally. Milk prices across the country have dipped by over 50 per cent in the last few months and milk procurement has also come down. The artificial milk glut is due to 1.6 lakh tonnes of unused skimmed milk powder generated by the various dairy cooperatives across the country. Internationally there have been disastrously high stocks of powder with farmers in New Zealand , US and Australia suffering.

Apart from the large supply, several other factors too appear to be responsible for depressed agricultural prices.

Food prices prevailing globally could be  an indirect factor though linkages are not across and are weak in nature. Depressed commodity prices have restricted the market for agricultural exports for several years. A shift in consumption patterns and consumer food preferences could also be contributing to the low food inflation. Globally, the demand for agricultural commodities has started to weaken, and this trend is expected to persist over the coming decade.

According to the recently released ‘OECD Agricultural Outlook 2018-2027’. production has grown strongly across commodities. In 2017, production reached record levels for most cereals, meat types, dairy products, and fish. On the other hand, as demand growth continues to decelerate, prices of agricultural commodities are expected to remain low.

According to the report, much of the impetus to demand over the past decade came from rising per capita incomes in China, which stimulated the country’s demand for meat, fish and animal feed. Whatever little growth is now expected in terms of food consumption, it will be due to population growth and higher per capita income, with sub-Saharan Africa and India likely to account for a large share of the additional food demand for cereals in the coming decade.

In India, every year, farmers lose Rs 63,000 crore because they are not able to sell their produce at a remunerative price. Horticulture farmers are the worst hit. While government celebrates a production boom, farmers see their produce going waste even before they reach market due to insufficient cold storage capacity, unavailability of cold storages in proximity to farms and weak transportation infrastructure. In absence of such infrastructure, produce is sold in Fruits and vegetables are, therefore, largely sold at local markets at a throwaway price.

To address the long-standing demand of farmer organizations to fix Minimum Support Prices (MSPs) at 50% over cost of production, , the centre in the budget presented in February announced two major policy decisions. Firstly, it promised that henceforth MSPs will be fixed to ensure at least 50% returns on production cost to farmers and secondly, it pledged to ensure effective price support-based procurement of pulses and oilseeds, going beyond the usual rice and wheat purchased by the government for the subsidized public distribution system.

In line with its budget promise, the centre announced a steep hike in MSP of kharif crops—at least 50% more than the cultivation costs—in July. In September, it followed up with an ambitious scheme named Pradhan Mantri Annadata Aay Sanrakshan Abhiyan, or PM-AASHA, to ensure those growing pulses and oilseeds benefit from higher MSPs announced by the government.

The minimum support price (MSP) policy was supposed to help the farmer and keep prices at least fifty percent higher than the cost. But it is just a price guarantee, not an assurance about quantity. Predictably, traders refused to pick up crops at their MSPs from farmers. The farmers desperate to sell must have agreed to sell them at any price. It is quite possible that the farmers resorted to distress sale, maybe at prices lower than what they used to get earlier because the traders just refused to pick up produce at the recently announced MSPs. Unless MSP is backed up by procurement – either by the trade, or commodity markets, or the government, the mere announcement of MSP has no meaning at all.

What’s more, government agencies are now offloading their procured stocks at lower than MSP to make space for fresh purchases, which is further depressing market prices for farmers.

Maharashtra came out with a policy of arresting if traders bought below MSP so it may be likely that traders resisted buying itself.

All this does not bode well for farm incomes. As farmers and villagers face parched lands, there may be increased migration to the cities closer to the summer months of 2019. This may mean lesser farm labor and then of course there is the issue of farmers not planting enough next two seasons – which means food inflation next year may be high – unpredictably maybe. This may create volatility in prices next year and with two consecutive near normal monsoons.

There is also the looming national election in May next year, and falling incomes in rural areas could become a major electoral issue – we  will know soon enough!