In our previous blog https://www.plindia.com/blog/the-dollar-index-dxy-and-nifty/, we had indicated that the USD is at a nervous level but that markets may make new highs above 13000. That panned out well. However, in recent days, prices have started to retreat – perhaps influenced by the firming U.S. Dollar Index The trend-following Moving Average Convergence Divergence (MACD) oscillator has crossed to the downside on the USD generating a “take profit /sell” signal. While we expect the EEMs to do well in the second quarter and the rest of 2021 as one expects the longer-term trend of the U.S. dollar to be lower, the next several weeks are likely to see lower prices for EEMs.

The USD
Except for corrective rallies, we have been consistently bearish on the USD for about a year. However, since last week one’s been wondering whether the dollar is consolidating, and possibly reaching a bottom. And no one is clear at this moment as the current levels have potential for a sharp move either side. 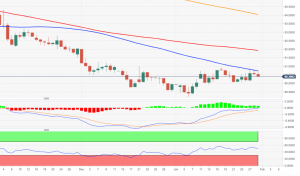 If one were bearish, the ongoing efforts by both the Fed and US legislators that have produced record easing and the most supportive fiscal policy in history because of COVID-19 are weighing heavily on the USD. As well, the lowest interest rates on record for the US mean no payout for dollar holders. Plus, the massive stimulus will exacerbate debt. That may be one reason why bearish bets on the dollar are at their highest since 2011.

On the contrary, there is too much crowding in this bear trade so one has to be cautious about exactly the opposite!

The DXY currently trades at $90.5 and trading slightly below the important resistance level at $90.92. A clear break above $ 91 will mean that bulls have prevailed. This will likely push the index above $92 in February and will be very negative for emerging markets.

WHAT HAPPENS TO MARKETS

The last couple of weeks have been negative for most markets and India is not alone. A highly likely cause is the DXY bullish movement observed and that may remain the most crucial factor for the near and mid term.

Its also possible that EEM valuations at current levels have become slightly hard to digest for global investors. A deluge of fresh investment into exchange-traded funds (ETFs) that buy emerging market (EM) stocks and bonds slowed last week as the developing asset rally showed signs of fatigue. This was the first pause after a long time.

US-listed ETFs that invest across developing nations as well as those that target specific countries received $462.3 million in the week ended January 22, compared with gains of $3.55 billion in the previous week, according to data compiled by Bloomberg. However, to be fair, it was still the twelfth week of inflows totaling $23.1 billion. News is that Vanguard has been busy selling Indian stocks these past few days which may be the precursor to this flow number turning negative for the near term. The slowdown came as some investors questioned the recent euphoria in risk assets. Bloomberg’s Fear-Greed indicator for the MSCI developing nation stock gauge, which measures selling strength versus buying strength, has climbed to its highest in almost a decade, a sign that gains may have been excessive.

Cash allocations are at their lowest level in eight years, triggering global advisor BofA’s sell signal. Equity allocations are at their highest level since January 2018, when indices peaked and then plummeted following a furious market rally. Contrarians will be especially concerned by heady sentiment towards emerging markets – the most preferred region for 2021, fund managers are more overweight in emerging markets than at any time in history. Excessively bullish sentiment can be a red flag, prompting BofA’s stark warning: “Risk correction imminent.”
Similar sentiment is voiced by Goldman Sachs which declared “Emerging Market Assets Are Near Highs. ”

The mid term looks good however. PL analysis puts Nifty levels at 15000 plus levels from an FY 23 earnings perspective and valuing earnings at a reasonable 20x. Global giants like UBS Wealth recently pointed out that while the forward price-earning discount of emerging-market equities to developed market equities increased recently to 28%, above five and 10-year averages “Over the next decade, we expect much lower developed-market equity returns – about 4%-6% nominal returns per year in local currency terms. But in emerging markets, we expect roughly 9% annual returns in US dollar terms, largely thanks to better potential for long-term profit growth”

With the Nifty generating what may be an undoubtable sell signal sometime in late January (The monthly chart above shows a very unfavorable risk return around 14500 levels), its possibly time to take some money off the table and wait for the events to pan out. With the budget out of the way, and a clearer view on the USD, it would become easier to figure out what 2021 holds for Indian equities.

For now, the current correction may be treated as a healthy move downward to shake off excesses in an otherwise continuing long term bullish trend. The DXY will guide us clearly from hereon so keep watching that space!

Do watch the market action live at https://trade.plindia.com/TradePlus/login with your Online Trading Username Password (same as the mobile App) or if you are not a client, do sign up with us at  https://instakyc.plindia.com/

Do join our Telegram Channel , @PLIndiaOnline, for the latest research updates and our thoughts and views!