Traders have hundreds of technical tools and price action strategies to help them take advantage of price trends and ranging markets but predicting the direction of short to intermediate moves in the market is notoriously difficult. That’s why some traders gravitate toward more market-neutral strategies that can offer potential profits no matter which way the market moves. One of the more popular of these strategies is pairs trading.

Pairs Trading is a market-neutral strategy (meaning market direction doesn’t  matter) and involves pairing a long and short position on strongly correlated stocks. While it isn’t riskless, by understanding how pairs trading works, how you control risk and how you manage profits, it’s a great tool to add to your trading arsenal !

The Origins of Pairs Trading

The first of such trading is generally credited to a group of computer scientists, mathematicians and physicists assembled by  Morgan Stanley & Co. in the mid-1980s. The team was brought together to study arbitrage opportunities, employing advanced statistical modeling and developing an automated trading program to exploit temporary market imbalances. While the team’s resulting black box was traded successfully in 1987 – the group made a reported $50 million profit for Morgan Stanley – the next two years of trading saw poor enough results that in 1989 the group disbanded!

Over the years, pairs trading has gained modest attention among individual, institutional and hedge fund traders as a market-neutral investment strategy.

Today, by using technology as well as drawing on fundamentals, probabilities, statistics and technical analysis – pairs traders attempt to identify relationships between two instruments, determine the direction of the relationship and execute trades based on the data presented.

Simply put, pairs trading involves finding two stocks whose price movements have been highly correlated, and then, when the correlation is perceived to have (temporarily) weakened, taking a long position in one and a simultaneous short position in the other. Its like the two drunk brothers in a famous hindi (Naseeb!) movie walking down a road – temporarily drifting apart as the alcohol kicked in but then finally coming back together again once sanity returned! Similarly, in pairs trading, a profit is made if the correlation reverts back to the average of its history.

The idea is to trade the two stocks by studying its historical relationship and spotting an opportunity which has arisen due to breakdown in the correlation and essentially we are betting that the gap would come back to its original state (called mean reversion).

Since we are Long Stock A and Short Stock B, Overall market direction doesn’t matter. As long as the stocks separate and then come back together a profit is made, even if both stocks drop or both rally but get back in sync by doing it.

That’s the theory, but deciding when to take a pairs trade, how to control risk, and when to take profit is a more precise matter.

The first step in choosing the pair is to find two stocks that have historically demonstrated a strong degree of correlation in price movement. As a starting point, many traders will look for stocks in the same sector or even better, in the same industry group. Stocks in unrelated industries tend to have weaker correlations than those in the same industry. For example, if RBI increases the interest rates, then all corporate banks would be affected the same way and likewise when the rates are lowered and therefore, are likely to be more correlated than across industry stocks.

One therefore typically looks for twins where the correlation in daily returns is higher than 85% – and several such pairs exist in NSE today – example, Hero Moto and Bajaj Auto which have traditionally displayed a correlation of above 87% over the past 1 year. 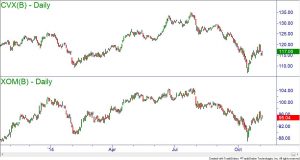 The above image even visually may confirm that the stocks are correlated dynamically. While looking at charts can help narrow down what might or might not work as a pair, the next step is to find the actual numerical correlation between the two stocks. Correlation is a term from regression analysis that seeks to see how closely a dependent and independent variable are related. The correlation coefficient is a number ranging from -1 to 1. A value of -1 means that two variables have a perfect negative correlation—one variable moves up, the other moves down. A value of 0 means there is no statistical correlational and a value of 1 means a perfect positive correlation.

Once the correlated pairs are shortlisted , one calculates the historical spread or price ratio.

One may also plot a 200-day period moving average is applied to get a “normal” or average  ratio (example 1x for Hero/Bajaj ). One also plots indicators or overlays like Bollinger Bands are also applied (200 periods and 2.5 standard deviations)

Once we have the price ratio plotted, we look to see if the ratio is mean reverting. If indeed it is, then one shortlists this as a likely pair to trade when a divergence occurs.

Step 3 involves finding opportunities to trade! Essentially after plotting all of the above, one  is now required to spot times when the ratio has moved significantly away from the norm, offering a trading opportunity. These may be intra day (example, a sudden blip has caused Hero Moto to fall sharply while Bajaj is not moving – instead of going long Hero, which may be risky, one may Long Hero and Short Bajaj if one presumes the gap will close during  the day) or positional (where one  is betting Hero Moto has more momentum than Bajaj or fundamental triggers. 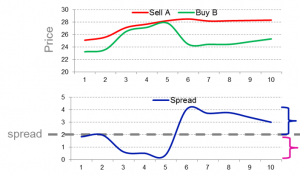 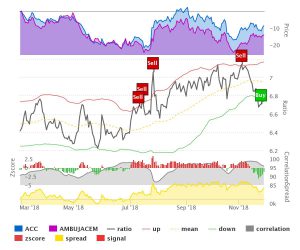 In the above trade,  using the latest data we have, we are wanting to go Long ACC and Short Ambuja based on our parameters. We expect this trade to now move towards its mean and generate profits for us.

Things to Watch out for

Position sizing – When you are attempting to work on price ratios or spreads, you are indirectly assuming that you have equal exposure to both stocks but that may not be true. Example, Hero (Long) is priced at Rs 3000 and has 500 shares per lot versus Bajaj (Short) which is priced Rs 2700 but same number of shares – in that case, your trade is not even on both Long and Short so ideally you should adjust for this Rs 300 difference by using more lots till both become equal or by borrowing Bajaj shares in  SLB). Or you may leave it as is if you want to be net Long on markets

The other factor is co-integration : Meaning just because the two seem correlated doesn’t mean they are as there could be something  else which was driving  this similar movement and that “something else” may not happen in the future and the breakdown in correlation may be permanent! It is therefore important to test the data by using methods which ensure that the average or the mean is indeed “stationary” and just doesn’t seem so! Getting into a bad trade may mean you will lose capital faster than you say “ Nasty!””

Pros and Cons of Pairs Trading

Pros include the strategy being market neutral. – little regard or time needs to be committed to study of broader market conditions. The strategy is also quite flexible; shorter term traders can use less of a standard deviation or a shorter time frame (i.e. 30-minute chart) to trigger more trade signals.

Cons include the possibility that a divergence can last much longer than expected, or the prices can simply continue to diverge based on fundamental changes in company structure or performance. This is why a risk limit must be set to avoid catastrophe situations where the two stocks continue to move more and more out of sync.

The strategy also goes against traditional trend trading concepts of buying the strongest stocks and selling the weakest – pairs trading does the opposite. So sometimes its counterintuitive and uncomfortable!

Traders must also consider a stock’s beta. Two similar stocks that have very different betas indicate a discrepancy in volatility. If one stock is much more volatile than the other it could cause issues with the trade. Ideally, pairs trade with stocks that are correlated and have similar betas.

Pairs trading is a popular trading approach that appeals to many, especially to those who like the idea of having a more market-neutral strategy. Just as with any strategy one suggest that the trader have a trading plan with predefined entry and exit rules and have the discipline to follow them no matter what the market does.

Transforming pairs trading from a theoretical construct into a practical reality capable of generating profits will involve several steps:

The successful execution of each of the steps is a critical element in the process of becoming a profitable pairs trader.

At Prabhudas Lilladher, our Algo Desks constantly scan these opportunities using proprietary methods – which are disseminated via our branches – and is in the process of soon launching an Algo Strategy around this (Minimum Size Rs 5 Lakh Margin) for interested clients.

If you are interested in our trade recommendations or starting an Algo Account, please do mail us at tea@plindia.com or call any of our officers (www.plindia.com/contactus.aspx)